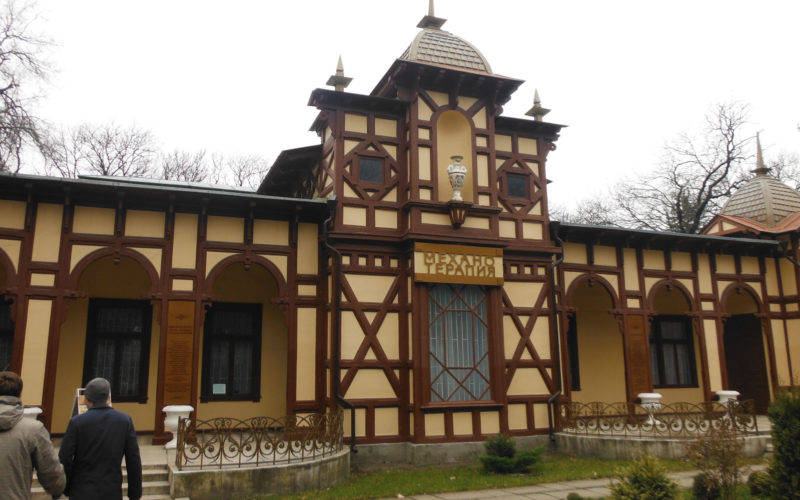 In November 2014, as part of a large delegation for the exchange of experience, I had a chance to visit the Stavropol Territory. Upon completion of all business events, the hosts organized a tour of the resort areas for us. And of course to the well-known Essentuki, which has a health resort park In which there is a building under the intriguing name of the Zander’s Mechanotherapy Institute. In common parlance it is called “Mechanotherapy”, however it is written on it. Further, I will use mainly other people’s photos, sometimes with an indication of the source, sometimes – no (yes, their owners will forgive me, however …). As I already said, there was a large delegation of us there, and almost all of the photographs contain one or another colleague of mine, and sometimes a whole bunch. It is impossible for me to get permission from everyone to post their photos on the Internet. Therefore, of the two violations, I choose the lesser, keeping their privacy in peace.

Inside, the pavilion is a sports hall of intricate architecture, jam-packed with various exercise machines.

Nothing special, except that the pavilion itself was built in 1902, and the simulators in it are even older.

They were designed by Gustav Zander, a professor at Uppsala University. Beginning in 1857, he created several types of devices that were made using leather, wood, metal and contributed to the dosed effect of movement on a particular group of diseased muscles.

It should be noted that not copies or other remakes are presented in the hall, but the original structures. Moreover, they were allegedly given a 500-year guarantee. So you can take your time – you will still have time. It is from these devices that it is customary to count the life of fitness and other aerobics. If you look closely, then in their images you can see the features of modern simulators