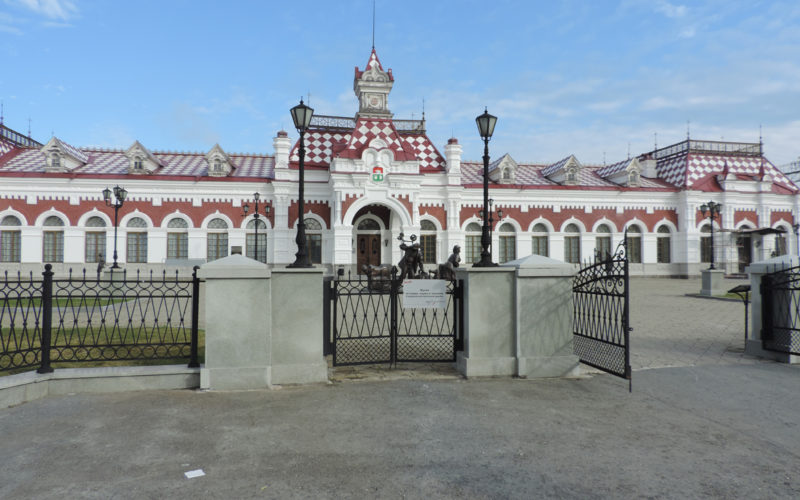 Very close, within walking distance, with the Yekaterinburg railway station, there is (as you exit to the right) another similar building of recognizable design and cheerful colors, which is currently  “Museum of History, Science and Technology of the Sverdlovsk Railway” The building itself was built at the beginning of the last century, the station ceased to be even before the revolution, and became a museum in 2003.

Immediately from the entrance, a model of the Cherepanov steam locomotive And then there is a funny device – railway bicycle from 1887 On the other side of it is a small selection of rails, pads and tools. The workplace of an electric locomotive driver is modeled nearby And you can even sit on it and “steer”! What the boys enjoy with great pleasure. And the fact that they are already gray-haired does not bother them much.

Of course, the museum has models of rolling stock Everything is like everyone else. But there is also a distinctive feature: a craving for sculptural compositions. It manifests itself already at the station square, on which the bronze group, which is understandable to me in a man’s way, is located Closer to the façade, there are single sculptures of the key figures of the railway communication: the station superintendent (there are no such ones anymore) and the stewardess (there are still such) A little further from the building were the builders, but not of communism, but of the railway: a slightly embellished shpaloukladchitsa (woman laying sleepers ) When I was young, I was building a railroad, so I can roughly imagine this contingent. True, not of modern times, but of the 80s.

The topic continued a little indoors, but I’m not old enough to add personal memories here too.

One Reply to “Museum of History, Science and Technology of the Sverdlovsk Railway”