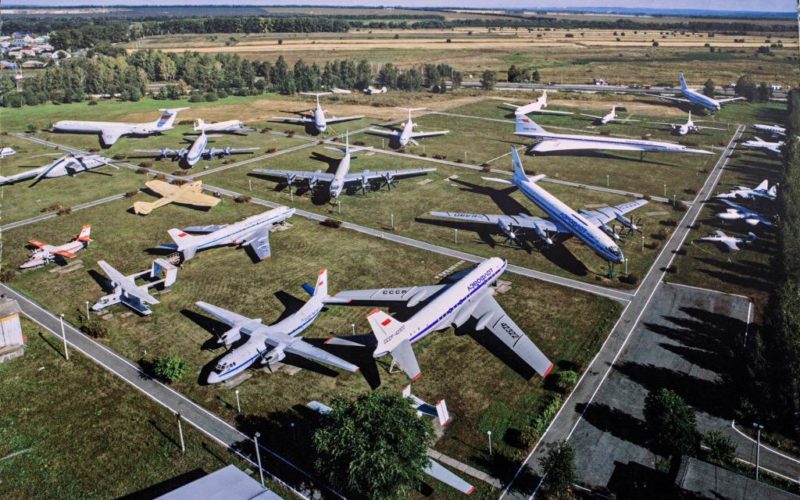 In 2018, for business reasons, I had a chance to visit Ulyanovsk. Despite the heavy workload, we managed to find time and visit, albeit very briefly, the Leading branch museum of the history of civil aviation. It is located near the local airport Baratayevka (this was then, and now is the full name of “Ulyanovsk (Baratayevka) International Airport named after N. M. Karamzin“.

We then deliberately got from the city by taxi – and this is 40 minutes one way, and if you believe Yandex.Maps, and there is no reason to believe, then it is generally within walking distance from the airport.

You can take a walk during a transit flight. I will not talk about ticket prices – they are funny, as well as the service on the territory. There is no crush near the exhibits, you can slowly examine each exhibit with feeling. What, for example, I do, examining the nozzle Judging by the ladder, there is an opportunity to look inside the cabin, but not on this day.

I always envied my brother, who had a chance to fly in it on the route Moscow – Alma-Ata. Considering that the commercial operation of the aircraft lasted for about 7 months and 55 flights (3284 passengers) were performed, and the cost of the ticket was one and a half times higher than on a regular one, then he was very lucky! Another, attention-grabbing exhibit was the ANT-4, which is also called TB-1 in the military version, in the bright livery of polar (as I understand it) aviation. I could not resist bad manners and asked to photograph me against its background the first of which was known to me from the days of not quite snotty, but rather early childhood.

Someone already recognized the pictures, for the rest I will explain: these are boxarts of sets of prefabricated plastic models of the GDR company Plasticart in a scale of 1/100 – the dream of many Soviet boys.

And I must say that it was in this museum that I met many old acquaintances.

On the IL-18, I was definitely snotty here, they took me to my grandmother

I flew the Il-62 in high school and it was even possible to smoke in it (but not me)! Right in the salon – there were ashtrays in the arms of the chairs.

Well, of course, I bring just boxards because I happened to collect them. A complete list and locations of exhibits are shown in the diagram.