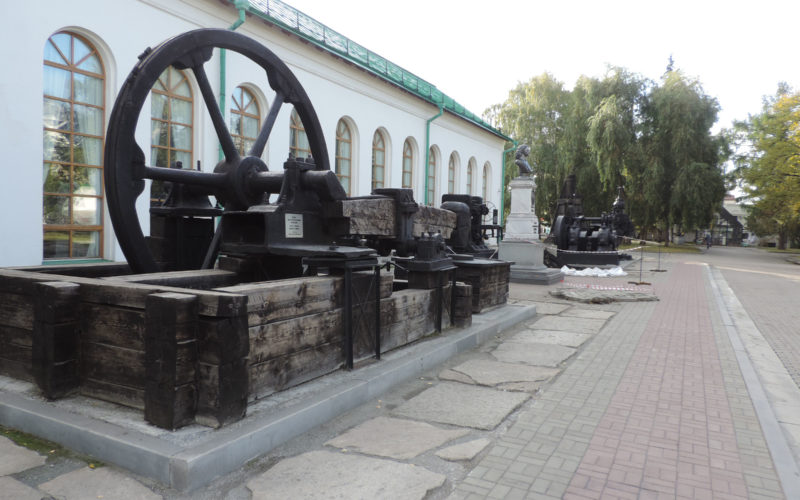 On my visit to Yekaterinburg in May, while riding on an electric scooter along the embankment to the place of the parade, I managed to replace something interesting out of the corner of my eye. On this visit, I specially went to this place, to clarify what interested me. It turned out to be a museum, or rather even the Museum of Architecture and Design. But he was not interested in me, it opens only at 11-0, but a street exhibition, which is a collection of old and unusual exhibits. Namely, huge machines of a century and even two centuries ago. Half of the facade of the museum was occupied by a steam hammer from 1826 A little further, after the bust of Peter I, with which the initial growth of industry in Russia is connected, there is a no less monstrous steam reversing engine, slightly younger than the previous exhibi. The “baby” of the Bessemer converter was lost between them. In a nearby small park there are metal shears made in Germany from 1908. Pay attention to the electric drive! There is also his peer – an American edging press And the cruciform grooves further enhance this feeling inspired by the monumentality of these exhibits.

Since the exposition is small, it turned out to briefly and generally show each of the exhibits The exhibits themselves are very much covered with black paint. It is quite possible that such a layer has hidden some constructive delights, but it will obviously last longer. ending everything with this “bird of tomorrow”. I will not say about the whole museum – I will try to get into it again, but this exposition is definitely worth visiting. It is in the center of the city and is always open – come!