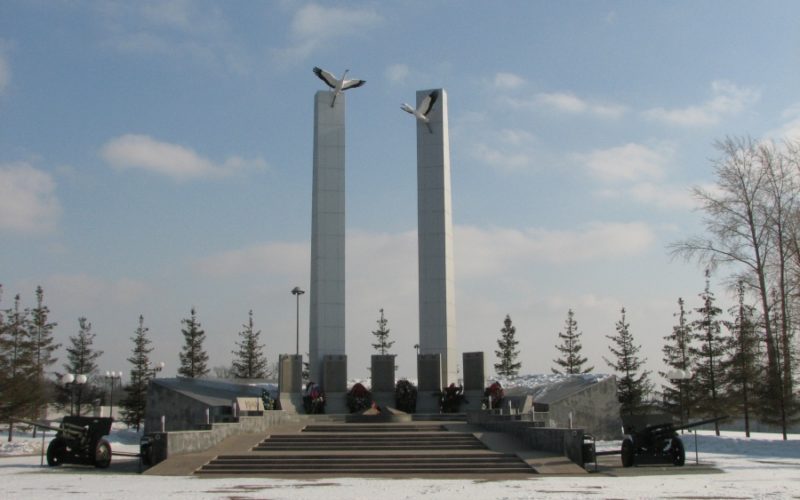 All my materials, except for this, I first publish in Russian, and only then in English. Well, I cook them always in my native language. In this case, it was an answer to a question from New Zealand forum member Dioramartin on the KitMake forum, for which many thanks to him. I considered the prepared material worthy of bringing to your attention.

The museum is large, there are many materials on it, and the main difficulty is to find a grain of information in a pile of words.

Direct quotations from Internet pages are in italics below. I was too lazy to restore references to the source, but if necessary, a direct search will accurately indicate it.

History of the Museum

In almost every Russian settlement, except for very small ones, there is a monument to the Great Patriotic War – the Eternal Flame. There was one in Verkhnyaya Pyshma near the main entrance to the plant (photograph 1988) In 1991, it was radically changed: by installing 5 plates with the names of factory workers who died during the war. And in 2005, it took on a modern look: the stele “Cranes” was added. At the same time ” … with the help of search teams and with the active assistance of the Russian Ministry of Defense, we managed to get the first exhibits of the future museum – two guns that liberated Soviet Belarus from the Nazis. ”

And so the idea of creating a museum was born. “. … Its opening took place on May 9, 2006, and the first copies of military equipment were only ten! A year later, 20 samples were lined up at the “Cranes” memorial, and two years later, another 10 pieces of equipment of different branches of the military were added to the museum … ”
” … In 2013, the first building of the complex was opened – the Museum of military equipment… ”
Here is a fairly detailed report about the museum from 2016.
“…At some point, [the exhibits] simply no longer fit into the building, so in 2018 the exhibition center of the Museum of Automotive Technology was opened on the territory of the museum”
And what happened next, I have already told you.

Replenishment of the collection
“… In subsequent years, the open-air exposition was regularly replenished with new models of equipment, thanks to cooperation with the Russian Ministry of Defense, as well as search teams and private collectors.”

It must be understood that not all exhibits in the museum are original products. Yes, there are many originals. But a lot of equipment with varying degrees of historicity – not everything can be completely restored. If the hulls of military equipment are still in a “decent” condition, then their small elements rot completely. Here is what the museum workers themselves say: “. … in the restored equipment, the share of original parts can be increased to 50-60%, and in some cases even up to 70%. Everything else has to be made independently or ordered from other enterprises. ”

There are also layouts. This fact is not hidden, but is written on the tablets. I showed you a photo of the descent space capsule – this is a mock-up. A few more boats, also layouts.
Moreover, the layouts are different: you can make just the appearance of plywood, or you can completely build it. In 2020, the La-5 fighter was completely made for the museum in Novosibirsk, which simply did not remain anywhere.
“The difficulty in recreating this type of fighter is that it is almost entirely made of wood. The exception is the nose with engine cowlings, heat-resistant lining on the fuselage and other individual structural elements. Therefore … according to the factory drawings of La-5, the fuselage of birch veneer was again glued. To comply with wartime technology, they had to glue 6 layers of material, which in the design bureau was called “delta wood”. At that time, it replaced the scarce aviation aluminum in the USSR. The machine is equipped with the original ASh-82 engine. Work on the restoration of the aircraft took 16 months.”

Large aircraft can be found, with the help of the Ministry of Defense, along the edges of military airfields. Of course, you can’t just buy something like that. Here is a report on how the Tu-16 was assembled with an interesting time-lapse video.

One of the steam locomotives stood abandoned in the Yamal tundra beyond the Arctic Circle in one of the Gulags. He was begged from the local authorities (I just lived and worked there) and and taken out in parts by helicopter. But the American Catalina seaplane was bought in the USA. It seems that this particular one participated in the movie “Bad Boys”, but I don’t remember such a scene, and I’m too lazy to revise it. Here’s a build report.
I’m not sure which aircraft was in question (I couldn’t find the information again), but a few years ago there was a big scandal in the US patriotic public, as it turned out that one of the museum aircraft of local production was sold to another country and there were no such aircraft left in the US itself .

I have already said that one of the owners of the museum is the billionaire Kozitsin. I just found out that last year he bought his own museum from his own company for 1.2 billion rubles. As they write, this is a common practice when carrying out structural changes.
He sold Aircraft Industries, which produces the L-410 aircraft, to the Czechs. He himself flies an Airbus A320 for $67 million. So he has money and there is hope for further replenishment of the exposition.
And finally, a few links to other reports about this museum: on an automotive site with an emphasis on cars in two parts (beginning and end), on a military site with a large part of Lend-Lease equipment

The museum has an official website mkugmk.ru, but it is not very interesting in Russian, and even less so in English.