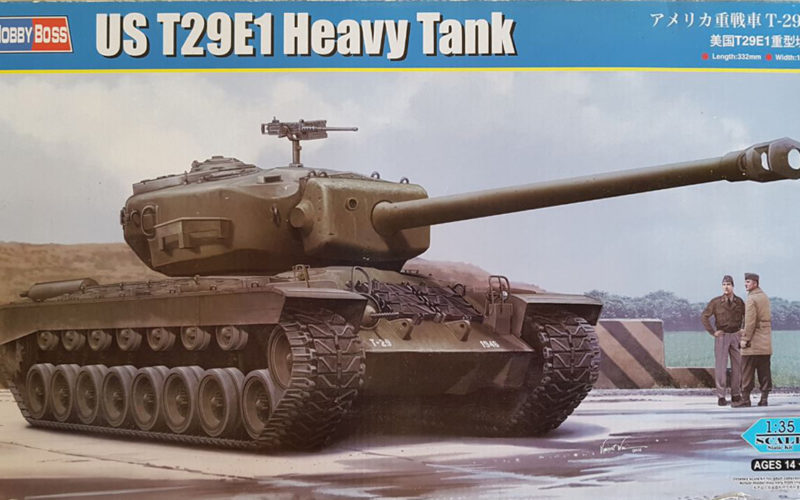 For reasons that I will explain later, it so happened that almost immediately after the assembly of the ARL 44, the American heavy tank T29E1 from HobbyBoss was also assembled. The tank, by the way, is also extremely brutal looking. Similarly to the previous model, I see no reason to post a review of the box or the progress of my assembly, but I bring to your attention again a parallel instruction, i.e. concentrate of impressions from the assembly, fixed with a fresh mind.

With the French tank, I was glad that its rollers were small, and the tracks were large and there were few of them. Here God took revenge on me. If the rollers are normal: there are 18 main and 7 supporting ones, all doubled. All are given with a margin.

But there are 240 tracks, of which 226 will be used. There is a reserve, but it is small, and they are fragile. Each track has 3 feeders. Plus there are two more connectors, one on each side, and they are different. They are given with an even larger margin (248 each), but very small.

I must say that the eminence and experience of the manufacturer affects. If Amusing Hobby has a dime a dozen jambs in the instructions, then HobbyBoss has an order of magnitude less. Maybe not necessary, but it’s better. But the pairs of parts D4 + D11 (by the way, there is a typo) and D5 + D12 are not interchangeable and can only be glued correctly (with the correct orientation of the sides with loops and handles). Having glued them correctly on them, decide on the slope of the blinds and at the front grids.

I have them oriented in different directions, but the front grids are almost completely hidden under the tower, so it’s not particularly visible.

Although making the grilles a solid plastic part is a bad form.

I will add to this that the places of their installation are marked very faded.

If you do not have wire cutters, similar to these it is better to immediately take the wire and bend them yourself. And drill out the attachment points.

Locks T2 and T3 refused to stay on the pins of the track and flew off at the slightest movement. As a result, everything fell apart. I had to flatten these pins a little and only then connect them. And they are thin and fragile! If you squeeze too hard – they will not fit into the holes, if you squeeze it too little – they will fly off.

It is also important that the sections belonging to different tracks must be mirrored. Having installed the next 5 tracks in the conductor, I looked very carefully at which side to insert which connector. And still, I was wrong once. And the top of the tank turret matches this perfectly. But part C3 is smooth! So, squirm as you like! Then I had to carefully break it down and simply insert the C9 part into the C4. They fit snugly enough into each other and now hold without gluing. I even wanted to choose with a drill, but then changed my mind, afraid of the difficulties and the risk of damage.